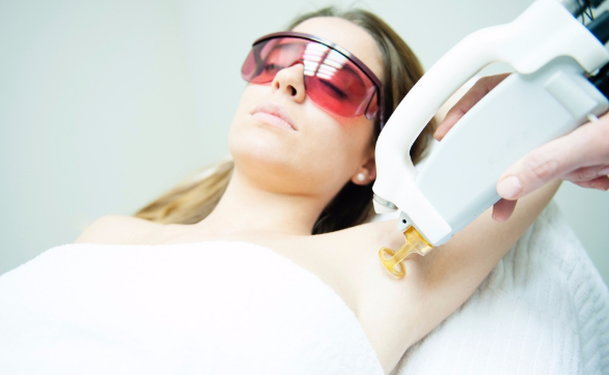 With laser and light-based treatments, concentrated beams of light are directed at the treatment area. Though such therapies can be used to treat vision problems and various forms of cancer, in the cosmetic field it is often used to remove moles, warts, sun spots, birthmarks, skin tags, unwanted hair and tattoos, as well as minimize the appearance of wrinkles, stretch marks, scars and blemishes.

There are two main types of laser light treatments: ablative and non-ablative

One popular laser technology is the fractional CO2 laser.

Fractional resurfacing is a laser-based cosmetic procedure which is used to treat a variety of cosmetic conditions, including sun damage, scars, wrinkles, and other damage that occurs as a result of the natural aging process.

Unlike other lasers, fractional lasers treat tiny, “fractional” areas within a broad target zone, allowing treatment with near pinpoint accuracy while minimizing or even eliminating damage to surrounding tissues. As a result, healing times are much shorter with fractional lasers than with other laser treatments in most cases.

Fractional resurfacing procedures have been increasing in popularity, due in part to the success of two fractional laser systems, the Fraxel system and the Affirm system. Both Fraxel and Affirm achieve remarkable results in rejuvenating aging and damaged skin, reducing or eliminating scars, wrinkles, discoloration, and other cosmetic blemishes while improving overall skin tone and texture. These systems also encourage the skin to produce new collagen, which results in an improved appearance over time, as new collagen forms and a firmer texture becomes evident.

During treatment, a special hand piece is passed over the skin, directing laser energy to the damaged areas. To avoid potential discomfort, most systems include a cooling mechanism to counteract the heat of the laser energy. In some cases, a topical anesthetic may also be applied. Recovery time from fractional resurfacing is minimal, and men and women can expect to resume their normal routines right after treatment. You can expect some slight redness, like that of a mild sunburn, and peeling following the procedure.

Results are long-lasting, and occasional touch-ups can help maintain results even longer. Fractional resurfacing costs vary based on the size of the treatment area.