Laser Liposuction is the latest method for removing fat with laser technology. The technique uses a laser to rapidly dissolve fat and tighten the surrounding skin almost anywhere in the body. The procedure is done in an office setting and does not require the use of a general anesthetic.

Who is a candidate for Laser Liposuction?

Laser Liposuction is for people who are in good health, not overweight, have an active lifestyle and have pockets of fat that they just haven’t been able to get rid of with normal diet and exercise.

What areas can Laser Liposuction treat?

Laser Liposuction has been designed to treat localized pockets of fat in the following areas:

What are the advantages of Laser Liposuction over other procedures?

How much fat can be removed with Laser Liposuction?

The procedure is excellent for removal of localized fat and as much as 3500mls of fat can be melted away at a single session.

Who is not a candidate for Laser Liposuction?

Those with the following conditions are not good candidates for Laser Liposuction:

Is the fat removal permanent?

The fat removal is semi-permanent. If you gain weight, the fat will come back in areas treated and not treated with the laser. There is no treatment that can permanently remove all fat cells. The best method for long-term fat removal is regular exercise and a healthy diet.

How is the procedure done?

The procedure is done in an office or clinic. Prior to the procedure, the areas to be treated are marked and a local anesthetic is used to numb the area. The laser is a pen-like device which is fired close to the skin. As soon as the laser is fired, the fat cells break up. The fluid release from the fat cells is drained away by the body's lymphatic system. The laser also causes small blood vessels to coagulate (gel) immediately on contact, resulting in less bleeding and swelling. The laser also affects the collagen in the skin which later causes the skin to tighten and shrink. Each session takes 30-45 mins.

You may experience minimal bruising, but the procedure itself is basically pain free. A pressure dressing or a compression is garment depending on the location of the treated area. The compression dressing or garment helps to decrease the swelling. The bruising disappears in 2-3 days and most people are able to resume their normal activities within 24 hours. The mild ache can be relieved with over the counter pain medications.

When can I expect to see results?

Soon after the laser liposuction procedure, the treated area will appear tighter, compact and smaller. Within the next 6-8 weeks, the skin and surrounding area will remodel and adjust to the body contour. The remodeling is a gradual process and the best results are seen after two months.

How many sessions can one have?

This will depend on the number of areas that you want treated, but in most cases it’s usually 2-3.

When can I return to work after Laser Liposuction?

Most people are able to return to work within 24 hours.

Can Laser Liposuction be used with conventional liposuction?

Is Laser Liposuction approved for use in USA?

Yes, Laser Liposuction has been approved for use in the USA by the FDA since 2006.

No, laser liposuction is considered a cosmetic procedure and it is not covered by insurance companies.

The Laser Liposuction procedure costs $2000-$6000. You should discuss the costs with your cosmetic surgeon before your procedure so that you are fully aware of all of the charges.

Before and After Photos 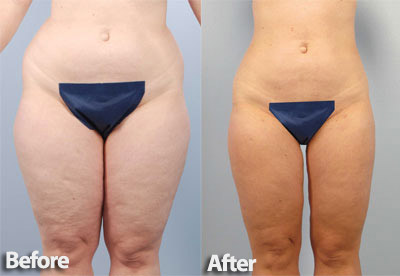